Reduce the organizational complexity in your product development.

"This course really blew my mind!"

To better focus on your customers.

To simplify communication with stakeholders. 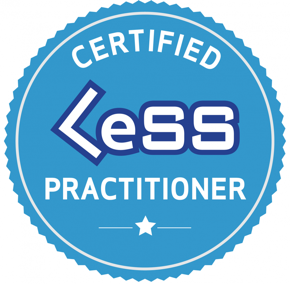 Quickly delivering value and innovating in ever-faster cycle times has become a key differentiator between good and great enterprises. Large product-development organizations are turning to agile principles and large-scale Scrum to sustainably deliver that innovation at a fast pace.
‍

What is Large-Scale Scrum (LeSS)?

Large-Scale Scrum (LeSS) is to organizations what Scrum is to teams: a simple, powerful, large-scale product development framework designed to evolve into something that fits perfectly within any unique context. LeSS builds on top of Scrum principles such as empiricism, cross-functional, self-managing teams, and provides a framework to apply them at scale. It presents simple structural rules and guidelines on how to adopt Scrum in large product development.

The following topics will be covered in the Certified LeSS Practitioner course:

Who is this Certified LeSS Practitioner Course for?

The only prerequisite to the Certified LeSS Practitioner Course is basic Scrum knowledge. That can be picked up by attending a Certified Scrum Master or a Professional Scrum Master course, or thoroughly reading Scrum introduction material such as the Scrum Primer and practicing Scrum.

The health of our participants has top priority. Hygiene measures are of course particularly important here:
‍

If you have the necessary technical infrastructure, you may benefit much more from the online Certified LeSS Practitioner training.

English
German
xyz
German
Trainer:
Konstantin Ribel
Register Now
SOLD OUT
Add date to calendar
2022
11
30
Tx
9:00
00xZ%2F
2022
12
02
Ty
18:00
00yZ
Learn how to simplify your organization by being agile instead of just pretending. Join Konstantin Ribel (one of 23 certified LeSS trainers worldwide) for a three-day course in Munich to learn the key thinking and organizational tools behind a lean enterprise. This course is in german language.
Munich, Germany
Large-Scale Scrum – Certified LeSS Practitioner
Request similar course
Next

Robert is one of 23 certified LeSS Trainers globally and one of the few with hands-on experience in LeSS and LeSS Huge. As a change agent for 15+ years consulting and coaching, he has worked with over 30 companies, including DAX-listed global brands such as Adidas, BMW, BP, Dr. Oetker, Henkel, Hilti, Hugo Boss, SAP, Volkswagen, and ZF.

“Robert used innovative ideas and tools in his online Certified LeSS Practitioner class. He was very friendly and patient with regards to questions and illustrated many aspects with anecdotes from the "real world". He mastered the technology well!”

““I enjoyed the content as well as the Certified LeSS Practitioner presentation using Miro. The diversity of the group was very interesting which lead to good questions and conversations.  Robert approached the training very much coming from the values side of LeSS (and Scrum).”